Life by the water's edge

A fresher ENW wind, sunshine for most of the day.

Heysham skear - low water 09:45 (MD)
Great Crested Grebe 6
Red-breasted Merganser 5 (one group)
Shag 1 x 2nd calendar year
Eider 6 female with juvenile on sea plus 11 partially eclipsed males, originally resting on a sand bar......
........then they flew off north as the tide started making.
Wigeon 22
Teal 3
Pintail 3
But, interestingly, all initially in the same flock. They came from the south, but as they crossed the skear, the Wigeon and Teal wheeled around and flew back south and past the harbour, meanwhile the Pintail continued north into the bay.
The above still is from this clip, you can just make out the three Pintail continuing north, just after the flock gains height the first time. The Wigeon and Teal looked like they were going to land, but they changed their mind and returned south after this clip.
South shore
It was this walk that today's title alludes. All the sightings of interest were on the water's edge, some resting, some bathing and some feeding (MD)
Rock Pipit 4 including the territorial bird in the slime pit. Howard took these excellent shots of it yesterday. It's got a brandling eathworm.....where has that come from! 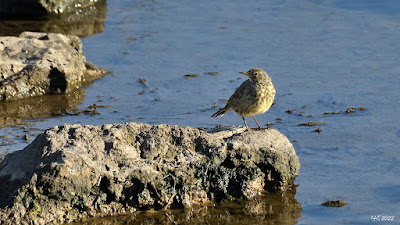 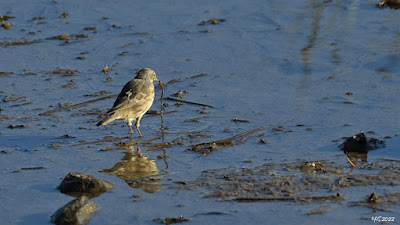 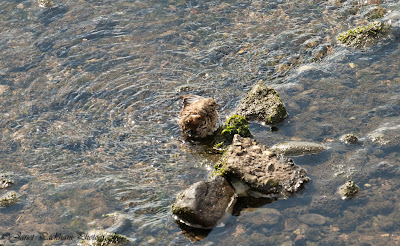 Just before No.2 outflow at the bottom of the sea wall was a tiny bird. Turned out it was a
Reed Warbler - it must have been exhausted, the tide was rising slowly and it couldn't be bothered to move. This is how far the tide (the bubbles are perfectly natural spume) reached before it moved!
This was the second time the tide reached it, it seemed a little more alert this time.
It was fortunate, as the tide was also moving kelp flies up the wall. It managed to catch a few, and then disappeared, when I wasn't watching it.
Mediterranean gull 1 adult flying around No.1 outflow.
Dunlin 25
again these were taking advantage of the rising tide to feed on the invertebrates on the sloping wall near the wooden jetty.
Eider 5 out from harbour mouth
Mallard 1 male - dragged itself out for a rest on the wall, near the lighthouse
Starlings 200+ feeding between lighthouse and waterfall - this shot is one of Howard's from yesterday
Grey Seal 1
There were Small White and Small Tortoiseshell coming in off the sea, just 6 and 5 respectively seen, but the tide was in and they were coming in all along the sea wall.
Nature Park
Long Tailed Tits 24 in one flock tree hopping south.
Migrant Hawker 2
Common Darter 1
Meadow Brown several
Speckled Wood several
Small White several
Small Tortoiseshell 2
Red Admiral 2
Hummingbird Hawkmoth 1 - fortunately I saw it land, I don't know if it had just come in, but when it was disturbed by a Migrant Hawker, it lifted high and flew off north.
50 plus House Martins over sea Whinnysty Lane - ref Kevin Singleton
Posted by Pete Marsh at 21:15 No comments: