So long, and thanks for all the shrimps

The gentle breeze started NNW before drifting to east and ending up SE. Occasional cloud cover but mainly sunny and warm.

Heysham skear - low water 11:25
I went down early before the outer skear was exposed, we are moving to neap tides now and it won't be exposed at all again for a week, I wanted to see just how many Sanderling there were, and I just got there in time to see them moving off - this is what today's title refers to (MD).
Sanderling c40 - a large reduction from recent days. They were on the last exposed island of the middle skear. I took this scan shot to show the Sanderling in the foreground, plus the gulls further out waiting for the outer skear to become exposed.
This was 10:00, just after this clip, most of the Sanderling flew off north, just leaving 6, which probably soon followed.
No sign of any Canada goose this morning.
Grey Seal 1
Josh Hedley scanned the skear and low water channels from Heysham Head around low water (11:00-12:00)

(Unfortunately missing the Sanderling by an hour!)

Just a quick check of the two main ponds.

Wildfowl status unchanged, although the Mute and Mallard families are alternating ponds. When the Mute move in the Mallard move out.

Only dragonflies seen were Four-spotted chaser.

The Coot pair on the "no swimming " pond have three chicks, I think the dragonfly on this clip is also a Four-Spotted chaser (MD)

South shore
I went down to the lighthouse area while the tide was still low and the wind was in the east. These conditions in warm weather brings insects in off the sea.

Grasshopper warbler - one singing from the non operational land next to the Power Station, several bursts heard from the track along the eastern boundary of the Power Staion that takes you to Red Nab.

Insects:
The only ones actually seen coming in off were various small "flies" a seven spot Ladybird and a couple of "Bees".
But there were a lot of butterflies around which weren't there on Sunday:
Small White 11
Common Blue 9
Mother Shipton moth 1
Grey seal 2
Finally, I mentioned the other day that the willow fluff was falling in a blizzard. With several calm dry days, in some places it is laying on the ground like snow. 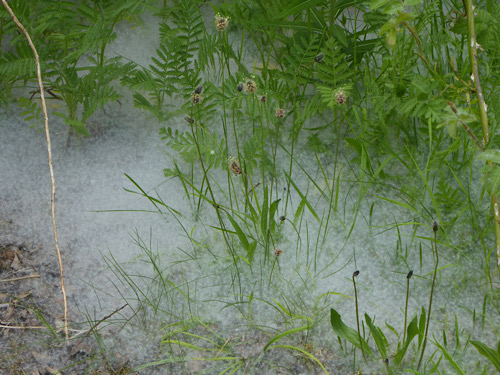