Today's efforts did not look promising with a forecast which was suitable for mist-netting, but the uniform unbroken cloud for the first few hours certainly put the lid on significant vis and the wind direction suggested a paucity of grounded migrants.  The highlight came very early on - a twilight check of what was on the outside of the moth trap window: 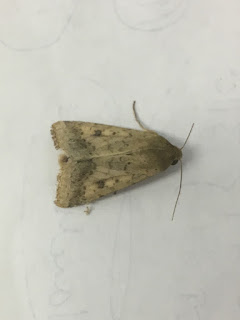 Office area grounded
Very quiet - not a single Goldcrest heard, just the 'resident' male Chiffchaff and another singleton ringed along with a single Blackcap.  About 10 Blackbird and 6 Song Thrush completes the perceived grounded migrant total within audible/visual range of the office