In the low tide channel:

The tern movement stopped when it got to low water.......
........which is a shame, because that's when I started (MD). Yesterday I couldn't quite make out the detail of the terns from the lighthouse. I either needed better optics, or to get closer. I went closer, today I walked along the north shore waterline.
Nothing was going through, but there were still c15 Sandwich Tern hanging around and feeding. They were using the buoys out from the north wall as a resting point:
By this time the tide was making and a mist rolled in with it. It made it very difficult to focus on the pale terns against a light background. This is the best I managed of one feeding: 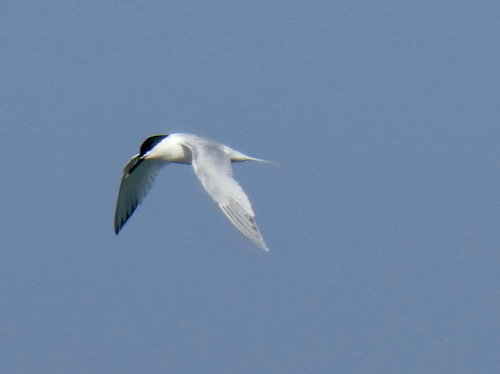 They hung around till 10:40 then they all drifted off. Another 2 flew in at 11:15.
Orange Tip 1 male (another emerging butterfly) - seen in garden on way back.
South shore
A walk along the sea wall late afternoon.
Wheatear 1 Red Nab
Rock Pipits 5
2 on Red Nab one displaying.
Three near the lighthouse. Goings on here are more complicated than a Coronation Street plot (what's that Elsie Tanner like!). But at least the ringed bird helps to make some sense of things. In this clip the bird "cowering" in the middle must be the female. The second bird seems to be either displaying or begging (perhaps there's no difference) to her. A third bird (stills reveal it to be the ringed male) then chases the other bird off. The female follows the ringed bird and they both resume feeding.
The vanquished bird stood on the wall near the lighthouse for a while, then moved to the mid point between lighthouse and waterfall. Things are pointing to the ringed male being the lighthouse territory bird.
This grey seal was on the north shore this morning, drifting past the buoys with the tide, apparently fast asleep. This was 11:15, it was still visible near the green marker at 11:45. This is a well known seal "activity", it's known as "bottling", you can see why.
Posted by Pete Marsh at 21:02 No comments: