The Brent seem to have exhausted the gut weed easily available on these neap tides. i.e. Doesn't rise high enough to reach the weed near the sea walls or go out far enough to access the main supply in the corner of skeer.
A total of 83 Pale-bellied and 1 Dark-bellied were located today in two visits.
10:30 there were at least 20 feeding amongst the rocks between positions A and B (see post 3/2/20). These were quickly joined by two groups of 6 and 5 flying in from west. 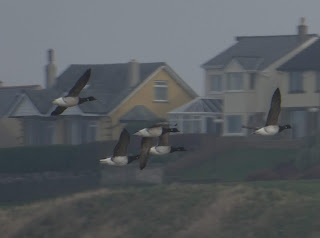 They circle around before landing.

A second check at 15:00 (actually a fruitless check for the "missing" Shag) found 45pb trying to get into the corner of skeer (position C). 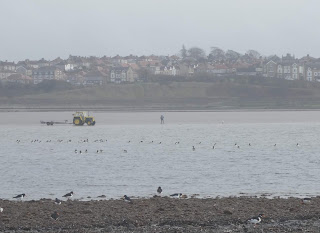 Unfortunately, the combination of landing a dinghy and a dog walker eventually proved too much.

They flew to the drain fed pool on skeer (position D). But they didnt feed in pool, instead they scraped for the meagre pickings around the pool. This gave me a chance to inspect 90 legs. Not one ring. They remained in this area after I left, and must have been getting enough food as they didn't return to corner even when they were left alone.

I then noticed that there were more geese in front of the children's play area (position A). But they were not feeding. Then, presumably after a reasonably undisturbed interval they scurried further inshore and started feeding. 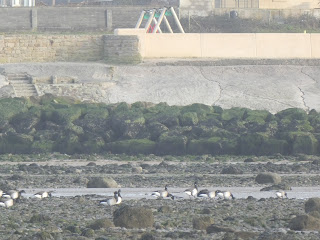 The children's play area can be seen in the background. 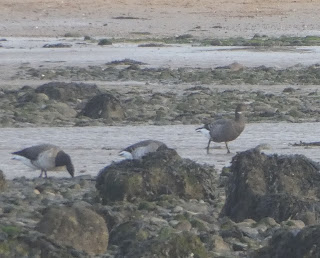 All the birds seen were Pale-bellied, with the exception of this juvenile Dark-bellied

The inevitable dog walker eventually flushed them, revealing a total of 39

They flew to the corner (position C) where they were still feeding when I left, as were the birds on the skeer.

Tuesday:
A circumnavigation of the Power Stations perimeter, in the vain hope of locating the elusive (gone?) Black Redstart, managed only a single Rock pipit.
Posted by Pete Marsh at 17:12 No comments: