The winds still from the west, light at first but freshening later. Very low cloud with fine rain/mist early on. The sun broke through mid morning, after that it remained mainly sunny all day.

Heysham skeer - low water 07:30
It was very misty at this time, so only the close in stuff was visible.
Eider c50
Red-breasted Merganser 5. Three males and two females
The unattached male appeared attracted to a passing Eider
Pale-bellied Brent goose 27. They arrived at 07:20 and landed directly onto the middle of the skeer. Later, as I was returning there were two groups of 7 and 15 searching for weed along the north side of the skeer. Possibly the other 5 were still around, I didn't go too close.
This "atmospheric" shot shows the two groups.
South shore - high water 13:00
At 11:30 this Grey seal was showing at No.2 outflow 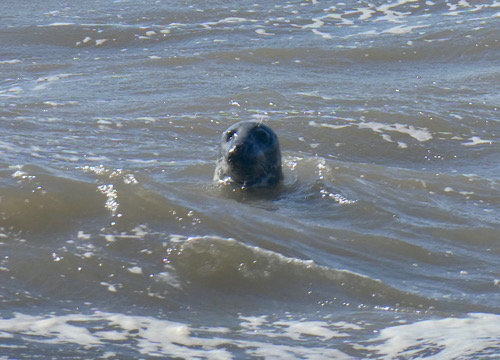 Just after this shot it dropped under the surface, so I (MD) was scanning the sea waiting for it to resurface. When I spotted two small, dark birds flying low over the water heading west parallel to the wall. I got my binoculars on them in time to confirm that they were
Black Redstart 2 female type. They weren't far out, c25m, but already past me when I spotted them and even further away by the time I was satisfied of their identity (fortunately with this species a rear view is all you need). So no chance of a picture. Kevin and Alison, then later Alan made a thorough check of likely areas further down the wall, but they were not relocated.
Rock Pipits 4 (Red Nab, sea wall, lighthouse  and waterfall)
Meadow Pipits 3-4 heading north
Common snipe 1
Jack Snipe 1
Both the above flushed from the saltmarsh by the rising tide - ref Alan Larsen.
Wigeon still plenty around, c100 today.
A couple of today's birds from Kevin: