First of all a decent ringing recovery after Craig was alerted about a local colour ringed Grey Wagtail.  Fortunately that means on territory at this time of year and a few mealworms borrowed from an angler produced these excellent pics: 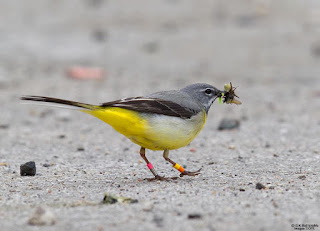 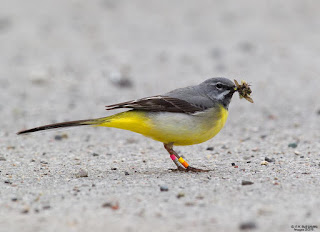 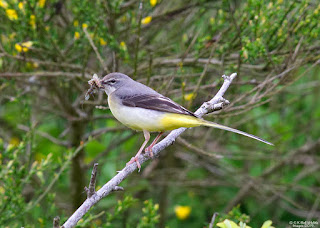 These are nesting at Crawshawbooth, Rossendale (SD8125) and this is the first time this adult male has used this territory which might be rather surprising, given its age.  One assumes it has been nesting at least nearby during the interim

It might seem surprising that a bird first recorded on 1CY vis mig on a seeming NW to SE heading over Morecambe Bay should originate or subsequently breed to the east or south-east of Heysham/Middleton.  However, the only already-ringed bird was a Roeburndale pullus and subsequent breeding season territories have been in Upper Hindburndale, Marbury Country Park, Cheshire and now this

Moths
Shaded Pug the best of a small catch

2CY Guillemot still in harbour
Posted by Pete Marsh at 13:49 No comments: