And then there was one

Winds still from the west. A cloudy start but the sun soon broke through and it remained mainly sunny all day.

The 2cy Med decided it was time to move off, it flew towards Ocean Edge, but I didn't relocate it in the Black-Headed gull roost later.
Eider 1 female
Whimbrel 1
This is part of the gull roost out from the saltmarsh, it can be awkward viewing in the morning as the light is behind them, but better views from the other side of the marsh. 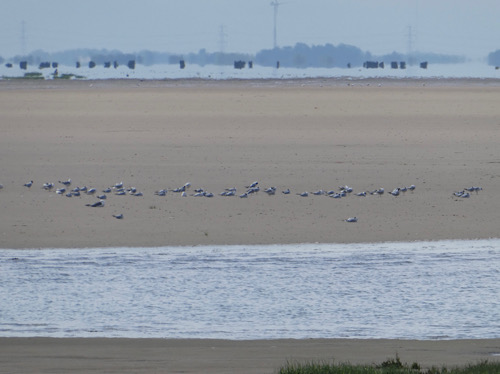 Heysham skear - low water 17:15
Great Crested Grebe 1 - this is what today's title refers to, viewing conditions were better this afternoon so I am confident that there were no more. The others must have finally moved on (MD)
Eider 1 female, possibly the one that visits the south side at high water
Curlew 150+ a lot more today than of late
Turnstone none seen today
Little Egret 3 none suggesting being ringed.
This Herring gull has just caught a crab. It is joined by a Lesser Black-Backed gull (both birds look pale in the bright light). This is not a opportunist, these two are regularly in association here, possibly the same two that were regularly together on the south side last year. Even so, the Herring gull wasn't for sharing.
But the Herring gull only eats half the crab, then nudges it over to the Lesser Black-Backed to finish off.
Posted by Pete Marsh at 20:50 No comments: