A seawatch whilst waiting for the cafe to open reminded me of an incident when I was with an American tour group at a Putple Martin-less Burt of Lewis.  A WA (Wallace Arnold) driver appeared with half a dozen people who is his words were like the living dead from the neck upwards. Whilst I was rabbiting on about coastal erosion I suddenly realised my group were staring at the driver and his unfortunate punters with a mixture of pity and macabre fascination.  He simply ushered them off the bus pointed his hand in one direction, acknowledged the array of hearing aids and screamed “Sea”. Then he pointed in the other direction and bellowed “Seals” before sitting down and lighting a fag.  This 30 min seawatch  consisted of a lot of incoming sea and four Grey Seal.  Prior to that the morning had been a bit better

Cuckoo - one calling Heysham Head North side
Pomarine Skua - in the almost certain category was one sitting in the Kent channel which was then lost changing vantage points.  It was probably the 0655 from Fleetwood but has to stay as light morph spp here
Wheatear - gang of 7 on rocks below Heysham heliport
Arctic Tern - flocks of 16 and 5 fishes and then climbed and headed NE
Sandwich Tern - 4
Red throated Diver - two in
Great crested grebe - 10 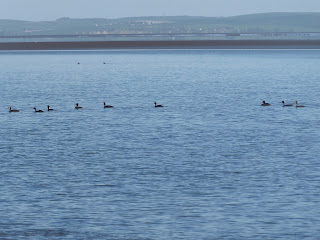 Nine of the Great cressted grebe plus two Red-brested merganser 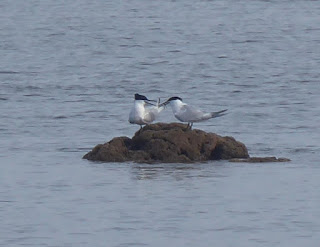 A bit of sandwich sharing 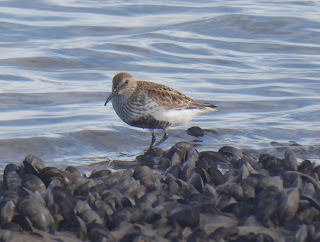 Last Dunlin on the skeer 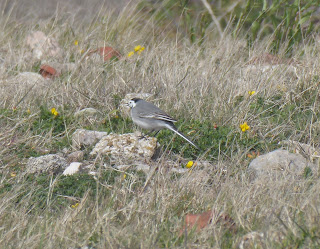 White wagtail on south harbour wall
Posted by Pete Marsh at 22:18 No comments: