Ready and waiting but few birds

Heysham Obs
The rain alarm said clearance again at c0930, so swung into action.  The problem was that the large numbers of Goldcrests had melted away/migrated on during the clear early part of last night and three hours with a mist net "only" produced five individuals (all unringed).  Significant numbers of thrushes heading south over my house 0830ish were also not replicated here.  Should have stayed at home and monitored the vis.  Thanks to Malcolm for Middleton/OE details

Here is a pic of what could easily be lurking somewhere on HN reserve - a presumed north European Woodcock which landed in White Lund estate yesterday morning and remained between the plant pots most of the day.   Thanks to Paul Cocker 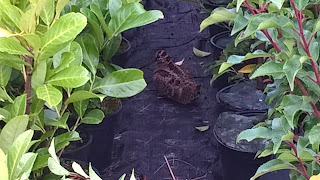 Heysham Obs
Posted 30 seconds too late for it to register as 'Thursday' which of course this was:

Messed it up big-style today as the lone observer.  Comments that you see nothing sitting in hides during the passerine migration seasons represent minor fieldcraft errors compared to retreating into the office in driving rain and SE wind which started at dawn after a clear night.  It then clears up and the wind drops but you don't go outside again until three hours later to top up the feeder! Immediately became aware of "Goldcrests in every bush"!

The one mist net set for one round produced 4 x Goldcrest, 2 x Goldfinch and 1 x Greenfinch
Posted by Pete Marsh at 00:00 No comments: