Janet took this nice sequence of a Herring gull dropping a mussel to break it open on the harbour wall. 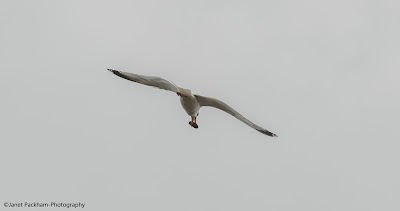 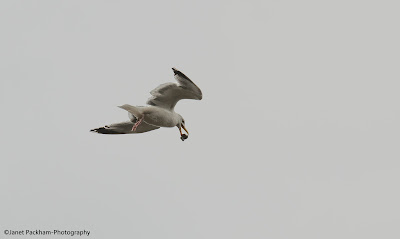 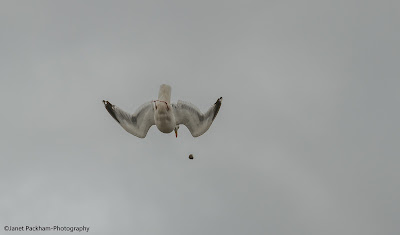 Middleton Nature Reserve (MD)
I went to check if the female Gadwall was tending her two chicks, she was.
There was also a male and female Gadwall on the Tim Butler pond. This is the eclipsed male (with just a glimpse of a Mallard at the end of the clip).
Other wildfowl as yesterday, except no juvenile Little Grebe were seen on the main pond, at least one had moved to the "no swimming" pond.
Stock Dove 2
Big increase in Gatekeeper numbers, they probably out numbered the Ringlet today.
South Shore - late evening
A Sabine's gull leaving Leighton Moss this afternoon prompted a check of the outflows myself (MD), Shaun and Alan Physick all had a look. No sign of the Sabine's (yet), but the Meds were catching sandmason worms on the beach near the wooden jetty
Mediterranean gull 17 - 12 adult, 4 x 2nd calendar year and 1 x 3rd calendar year. This adult catches a worm, they are very thin when "stretched" from their tubes, but protein packed.

Shaun managed to spot a green darvic ringed adult. Just within reading range. It was ringed as a nestling in Germany in 2012 and has visited Heysham each year since 2018
Posted by Pete Marsh at 22:03 No comments: