Itsy bitsy not a lot

The easterly did not really kick in until after 0900 and the start of the morning was cold clear with a full moon and a light northerly - a good recipe for staying in bed i.e. subtly unfavourably different to yesterday

Worthy of note....
Gannet - 2 out
Arctic Tern - 8 in
Sandwich Tern - 2 blogging and one bizarrely dip-feeding over wet mud next to Red Nab for 30 minutes
Brent Goose - the two pale and one dark-bellied birds still Red Nab but hidden in the back channel until the tide moved 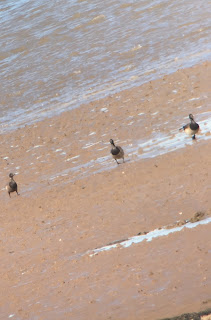