Little Gull - ad with damaged wing on outfalls this am (MD) and a 1st W was heading south along the tideline off Knowlys Road late am (PC). By high water both of yesterday's adult and a 1st W were on No.2 outflow (MD)

The midday IOM ferry managed to miss the north roundhead as it struggled round the corner and behind it were a welcome adult Med Gull and eight adult Kittiwake, five of which continued into the Bay 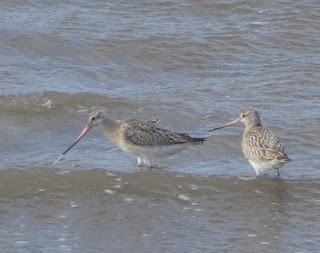 These two Bar-Tailed Godwit had been feeding in the soft mud between the wooden jetty and No.1 outflow, till overtaken by the tide. Probably not visible on the blog resolution, but if you open this image in "a new tab". You'll see the bird on the left appearing to fire a water jet from its bill. Having a mouth wash, or just having "fun" - it certainly looks fun! (MD)
Posted by Pete Marsh at 13:58 No comments: