Quality time with gulls in decent light at last

Heysham Obs
No it is not a 'nice day' when it is calm, the sun is shining and you are trying to watch gulls as has been the case rather a lot recently.  Gulls at all angles and all tones of grey depending on the angle of the sun.  Today was perfect with side-on gulls in flat light on Red Nab

The Bonaparte's was located very easily compared to previous occasions when it has been sleeping with the masses.  The grey nape is beginning to be evident and the head pattern now consists of a dark slate grey/black 'ring' running from chin to chin via the rear crown where it broadens slightly.  The crown itself is lightly peppered.

Not so easy were 2CY Meds!  They seemed to appear out of the woodwork when there was a slight dread and rearrangement of gulls - so easy to overlook at this time of year when even the bill seems 'nondescript' = helpful for sorting from still recognisable 3CY with unmoulted outer primaries

Red Nab/Ocean Edge foreshore & scans of the outfalls
Bonaparte's Gull - sitting on Red Nab & showing very well.  No flight views so not able to judge the state of wing moult
Med Gull - at least 30! minima of 11 juvs, 12 2CY, one 3CY, 4 adult-types.  "Our" 2P96 seen and at least one of the presumed German 2CY, but most of them were at rest not showing the legs
No sign Little Gull or any terns
Whimbrel - 2

Moths
Old Lady the star
Posted by Pete Marsh at 12:05 No comments: 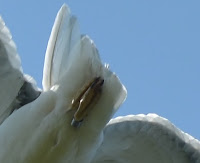 Also a Common Darters and a Brown Hawker,  on the dog walking areas of the reserve.
Photos by Janet Packham.