The breeze was much lighter today from SE early on when the bulk of the birds were seen.  Seawatching totals have been carefully aggregated from observers stationed on Heysham Head, North wall and South wall roundhead. Thanks to all involved.
Arctic Skua - two dark morph together flew across the bay heading for Lune Estuary, one very distant dark morph in later
Gannet 24
Arctic Tern flock of c30 + 7 in
Sandwich Tern 80-100 some very close in others distant blobs.
Manx Shearwater 62
Common Scoter c60 plus 5 plus c35 out
Puffin one on sea then flew in. A different distant one in seen by Shaun and Jonathan,
Guillemot c5 on sea
Razorbill 1 in plus 1 close in on sea
Razorbill/Guillemot 16
Kittiwake 8 on sea plus 1 in
Red-Throated Diver 4 including very close bird showing red throat!
Whimbrel 9 in 5 on Red Nab

Not a sign of any landbirds or hirundine migrants

Middleton Nature Reserve mid afternoon
All 9 regular warblers seen and or heard including
Cetti's Warbler - no swimming pond, fence pond and cental marsh males singing
Grasshopper Warbler just one singing today NW corner of western marsh near yellow barrier.
This Mallard with chicks was driven off the "no swimming" pond by the aggressive male Mute. 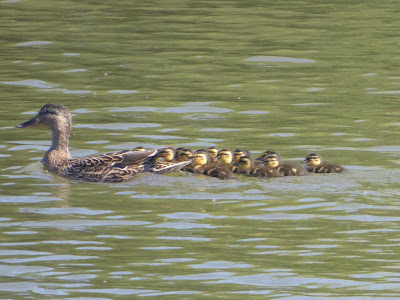 She managed to get all 15 to the main pond.

Janet reported Moorhen chicks yesterday
Buzzard 1 over to west
Dragonflies:
Four-spotted chaser 1 (first record of year from the recording area, although they were on Heysham Moss last week)
Broad-bodied chaser at least 3 tenerals

Red Nab high water 07:30
To continue the theme of specialised feeding methods. This is a Peregrine hunting, and perhaps not one for the faint hearted. Forget the graceful stoops from tv documentaries, this one is about opportunism and manoeuvrability (MD)
It did start with a stoop though, then a chase, after the Oystercatchers 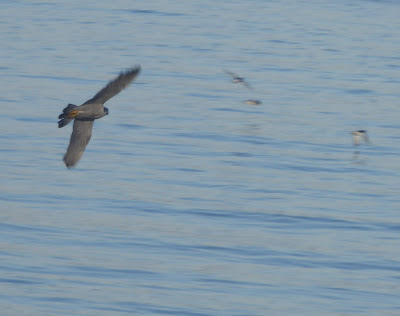 Then, as it was flying over the rocks it spotted a bird that hadn't taken flight. It stopped, almost immediately, in mid air. - you can see the effect of its wings down draught on the water below the Peregrine. 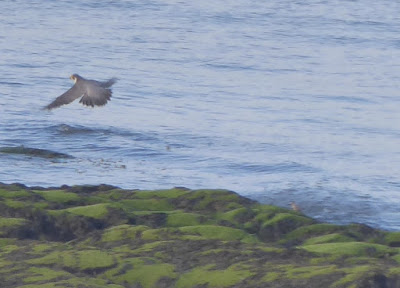 You can just make out the head of the prey bird behind the rocks lower right. It looks like a Whimbrel, probably exhausted, off passage.

The Peregrine spun round (there is a third of a second between these two frames) and headed back, this time the prey did manage to take off. Just in time.... 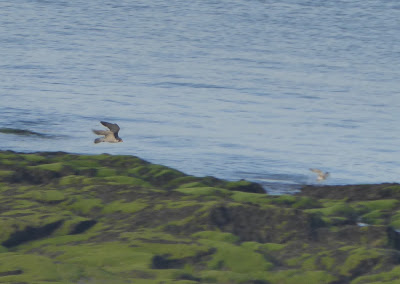 All the Peregrine managed was a talon full of feathers 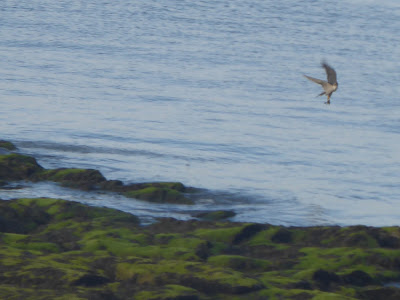 But it wheeled around again and this time grabbed the bird 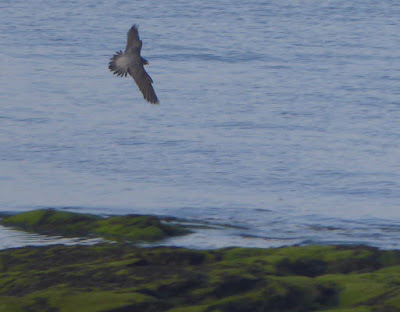 It flew off with its catch. Presuming the prey was a Whimbrel, the size relationship suggests the Peregrine was a female. 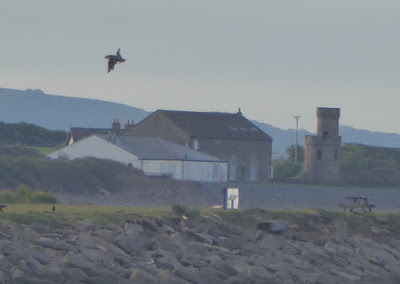 If nothing else this sequence demonstrates just how vulnerable waders are to predation, if they don't take to the air when a Peregrine is hunting.