Heysham Obs
Rustic Bunting
At 1020hrs, an unfamiliar flight call was heard approaching from the south.  This was repeated about 4 times before a small bird was located high in the sky.  After circling and giving a few more calls, it landed in a willow bush neat to the reserve office.  Binoculars were grabbed and expecting, at best, a Yellowhammer (rare here) giving a consistently odd call, I was surprised to see a "black head".  The call definitely wasn't Reed Bunting!  Then it turned sideways in full view.  Wow!  All the time it was giving this clipped call.  After about 10 seconds absorbing this and a bit of unrepeatable language, it headed off to the north-east over the classroom, still calling, and was last seen at a height level with the top tier of the nearby pylon.  "Vised off", and the obligatory search of the north-east corner of the nature reserve drew the predictable blank.  Seen this several times here - a 'vis mig' bird landing, contact calling and then changing direction slightly when taking off again

Grounded
Goldcrest - 8 ringed, but seemingly not many others around, perhaps 5 additional birds
Robin - a few migrants around (birds being chased by 'residents') with 4 ringed, including a very orange/grey low-weight bird
Redwing - one
Blackbird - 4-5 presumed migrants
Song Thrush - one probable migrant ringed
Wren - one unringed bird

Moths
6 Hebrew Character and two new species for the year: a routine couple of Common Quaker and a rather more interesting third site record (and 30-something county record) of Agonopterix ocellana 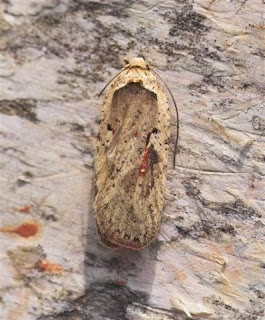