Bits and bobs after horrendous start

Heysham Obs
Every autumn has its low-point early morning session and hopefully this was ours.  Never mind the stronger-than-forecasted wind, goodness knows what was going on in the harbour - sounded like one of the rust buckets was being broken up on the spot as a tremendous racket drowned out most of the overhead stuff.   Then it improved with two flocks of Pinkfeet, a Grey Wagtail to ring and juvenile Little Stint (plus 5 juv/1st W Meds together)

Red Nab/Ocean Edge
Little Stint - juvenile with c25 Dunlin on the cobble/edge of OE saltmarsh - flushed by dog walker & flew to the far beach, but still in area
Ringed Plover - 27 with above, including non-British metal-ring
Redshank - 220 with above
Med Gull - 5 1CY sat on the sea off Red Nab
Little Gull - adult as above
Terns - none obviously left
Ringing totals summary to date
It has been a very good year for warbler species and Greenfinch/Goldfinch/spring Redpoll passage - the following totals of newly ringed birds are from the two Obs ringing sites at Heysham NR and Middleton NR, plus the Twite feeding station.  Just over 2,100 birds ringed so far. 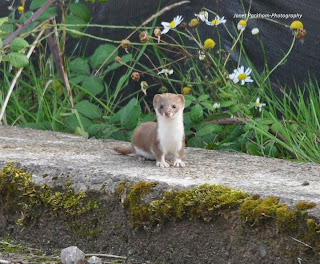