The fourth record since (including) the Heysham Barrows bird in 1977 was located the other side of the headland by Helen yesterday and showed really well on and off this morning allowing dog walkers, albeit the other side of the fence, within a metre!   Frequenting the field next to the footpath down to the prom at the western end of Knowsly Road (the one with the Strawberry gardens pub at the junction with the main Morecambe road).  Better pics undoubtedly forthcoming! 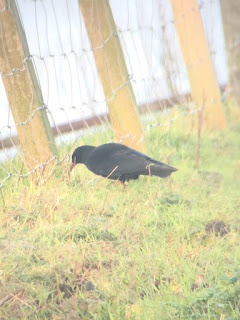 Offshore
Eider - 1520 in several groups in the area south of Heysham skeer (new record count but probably just due to favourable counting conditions)
Red-throated Diver - one very distantly towards Roa Island
Disappointingly, nothing else at all other than gulls and Cormorants located on the water in fairly good conditions with just a slight choppiness

Czech-ringed Med Gull was along the north wall