The gentle breezes switched to the south. Mainly overcast and dry.

First an omission from yesterday's records

Ringing this morning was a bit desperate with 11 birds in total between the four net sites. 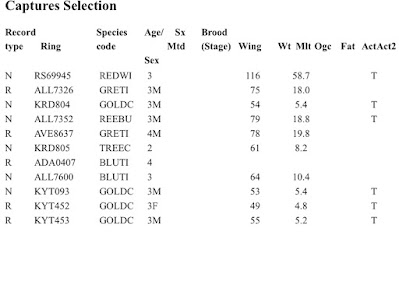 Few birds were seen moving except for Pink footed Geese:

Grey Wagtail - two separate birds dropped to the net area but were not captured even though a superfine net was set.

Saltmarsh 12:00 as tide was covering

Yellow-browed Warbler one by itself at the pond on the dog walk track that runs parallel to Moneyclose Lane at 1045.