The wind mainly from the west but moving around to the east by evening. Rain early on, then largely dry.

Heysham skeer - towards low water late morning.
Eider 104 feeding in the first channel area
Red-Breasted Merganser 1
Great Crested Grebe 4
Knot c1000
This juvenile Great Black-Backed gull was using its powerful bill to pull scraps off a dead flounder, the guts have already been eaten, probably by the smug looking adult.
Pink-Footed goose - there was a large low movement SW, towards roosting area on Fylde roosting area, as it was getting dark. Presumably movement from local feeding grounds. At least 500 at 16:15 with another c200 in smaller flocks till 16:35.
Update on yesterday's ringed Oystercatcher:
This is the history: 5155589/yellow LA
Distance from nest site 1823km SW
The scheme manager kindly sent us this picture of the nesting area. It really is a beautiful place, although in permanent darkness now. It's well inside the Arctic circle. 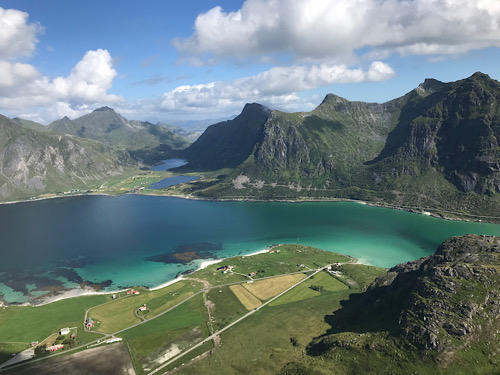 Flakstad church is bottom left, and the nest site is in the field between the church and the shore. One of the objectives of the scheme is to demonstrate the national and international significance of the area for birdlife. There is a road planned to go across the fiord on the right, which will significantly affect the tidal feeding areas. it is hoped to persuade the authorities to opt for a bridge instead. Heysham is the furthest west that any Oystercatcher ringed in northern Norway has ever been recorded. Let's hope it helps!
The bird was again feeding in the NW corner of the cricket field late this afternoon, easily seen from the car park.
Posted by Pete Marsh at 20:10 No comments: