Strong SW winds throughout the night and continued throughout the day, although easing slightly by the afternoon. Driving rain in the morning made conditions difficult and visibility poor.

Nothing of note has been reported from the sea as yet.
Rock Pipits 3 (Red Nab, Lighthouse and Waterfall)
Wheatear 1 Red Nab, seen both in morning and afternoon.
Shelduck and Wigeon, low single figures for both in the morning, none seen in the afternoon.
No snipe were flushed from the saltmarsh, by the rising tide. It wasn't 100% covered when I left, but I would have expected to see at least some Jack Snipe flushed if they had been present.
Southwest winds inevitably bring in lots of flotsam.
These young gulls in the harbour mouth were fighting over a cluster of Whelk egg cases. 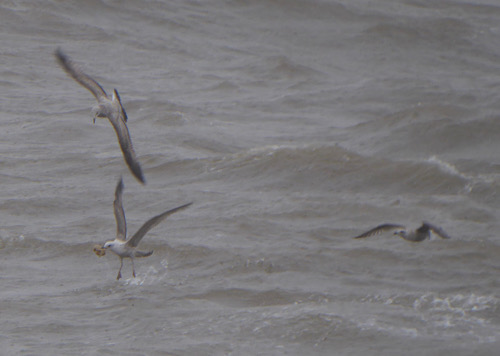 I didn't think they bothered with these, but this is the second occasion recently I've seen them fighting over one. Presumably they need to find "fresh" clusters, the ones on the tide lines will have already been examined and anything edible already consumed (MD).
Cuttlebone - These are the bone (inner shell) of the Common Cuttlefish. When they come ashore it is often in large numbers, not just because a large number all died at the same time and place (females die shortly after egg laying). The effects of tides and wind tend to congregate items of similar buoyancy and wind resistance. You get the same effect with human rubbish, e.g. all the part filled plastic bottles together one day, empty ones another day, nappy liners a different day (fortunately these are not quite as common or extensive as 20 years ago - perhaps the wind is finally starting to turn!).
Anyway, back to Cuttlebone - today they were everywhere.
If you want to check them out, or collect for your budgie, I noticed there were lots in the tide line in the small bay between Red Nab and the beginning of Ocean Edge. If you do intend to use them for your pet bird, make sure you wash them in fresh water and leave them somewhere warm until completely "bone dry" (the cuttlebone, not your bird!).
Today was never going to be good for photography, so I held back this one of Janet's from yesterday.
Just one final observation - myxomatosis - I usually see just one or two rabbits a year suffering with this disease. Today I saw two, one at either side of the saltmarsh. I'll spare you the images. Apart from the physical effects, this disease changes rabbit behaviour and makes them much less timid. There are plenty of local foxes that will take advantage of that, but it seemed strange to see two, I was wondering if some domestic dogs also cull the sick rabbits, there has been a distinct lack of domestic dogs around the saltmarsh this year. I'll keep an eye on things (MD)
Posted by Pete Marsh at 20:16 No comments: