Knowlys roaders are going to have to get used to walking past telescopes scanning the low tide channels.  This is a really good spot, the only disadvantage being that any bird you see is going to go progressively further away.......assuming you are watching the incoming tide.  Today from tennish to half elevenish was rather good:

Eider - 720 - 410 in loose flocks at varying distances, then a gap of at least half a mile of birdless water, then a single gang of 310 at medium/long range
Velvet Scoter - drake with the most distant and fast moving of the Eider flocks (channel tidal flow) - a small gang of Eider and the scoter could easily have been missed but for a wing-flap
Scaup - gang of five close inshore (the other drake hidden behind) 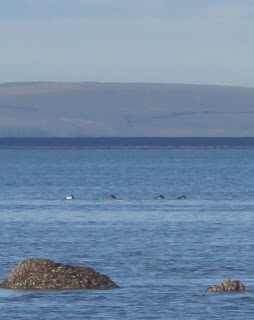 Thanks Malcolm - taken from the edge of the skeer 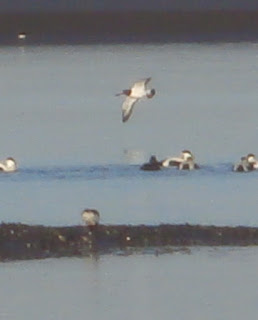 Whooper Swan - three distantly on the sea as seen from NH wall (thanks Pete)
Pale-bellied Brent Goose - two flew into Red Nab from the north suggesting they had been feeding off the horse paddock fields but inshore skeers not checked this am
Iceland Gull - 3rd W under the waterfall from at least 0800 (Malcolm) and was seemingly seen for most of the rest of the day plus a visit to Fisher's roof (thanks to Andrew & Jack for updates)
Chough - e.g. per dog walkers in the second field north of Half Moon Bay
Rock Pipit - one north harbour wall
Negative news by all accounts on Shag
NNEW Stonechats