Today's posting is from Jean.

The posting heading could be a name for a funpub but it certainly wasn't fun for the Gull.  A young herring gull had found what it thought was some food, only to become snared by a discarded hook and fishing line.  It was impossible to rescue the bird as it was at the bottom of the sea wall and the tide was in.  It will be a slow, horrible and sickening death for the bird and just because of someone's thoughtlessness and carelessness. I intend to take a plastic bag with me every time I visit the North Harbour Wall and pick up any fishing line. I don't understand why some people think that it is someone else's job to pick up their rubbish.  Instead of hiding beer cans under rocks or just chucking fishing line on the ground I wish they would clear up after themselves. 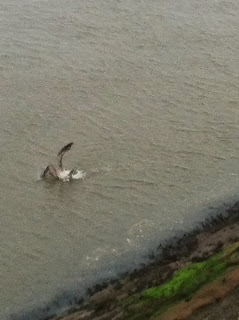 Hooked Herring Gull desperately trying to escape but this was as far as it could get.