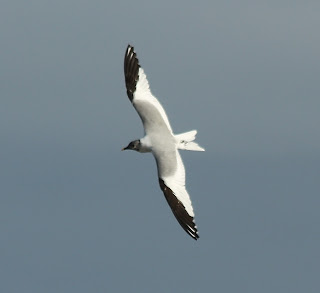 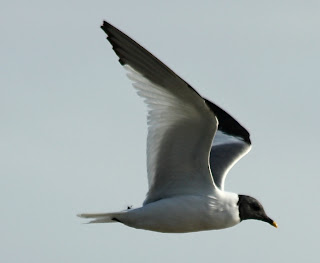 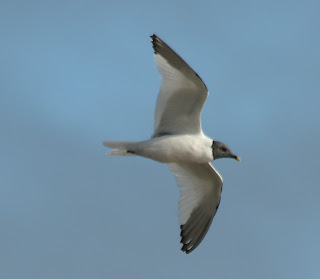 Thanks very much indeed for these Mike (Baron).  Latest info I have is that it was still there at least 1845hrs 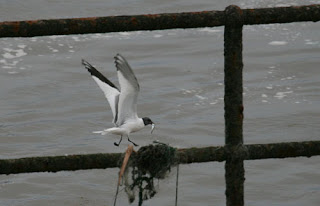 Thanks for this Mario.  The answer to those earlier observers who commented it didnt seem to be eating anything.  This pic was taken at 1845hrs
Heysham Obs
Posted too early this morning!  As I was originally posting, having given up on the sea, an increase in wind and rain coincided with Tom Walkington and Pete Cook finding a close adult Sabine' Gull passing the north wall at 0930hrs.  After then being seen off Red Nab and seemingly heading out, it was lost, retrospectively sitting on the sea, as it then returned to the outfalls/harbour mouth area for the rest of the morning.  Other observers should now be keeping tabs.  It remained until at least 1845hrs with occasional forays out to sea.  Note the apparent foot injury with one foot protruding through the tail.  Anyone who was struggling with tern ageing/identification on the public mere at Leighton Moss yesterday could do worse than visit Heysham outfalls in the next few days.

Terns on outfalls/off north harbour wall at various times incoming tide
Common Tern - minimum of 3 adult and 5 juvenile, many of these in one 'gang' and they seemed to disappear mid-morning.  I didnt check later in the day & no definite counts seem to have been offered.
Arctic Tern - minimum of two adult and 3 juvenile, later the number of juvs were reported to have increased to perhaps as many as 8
Sandwich Tern - three Red Nab/outfalls area

Heysham Nature reserve
Willow Warbler and Goldcrest (2) by the office
Posted by Pete Marsh at 09:03 No comments: