Looking back over 2020 - the Heysham Bird Report

Jean has provided this link to 2020 report.
https://drive.google.com/file/d/1H9AffILnhAVBRys6gyYdqA7OIM85dB4v/view?usp=sharing
(If this link doesn't work, click on image on side bar) 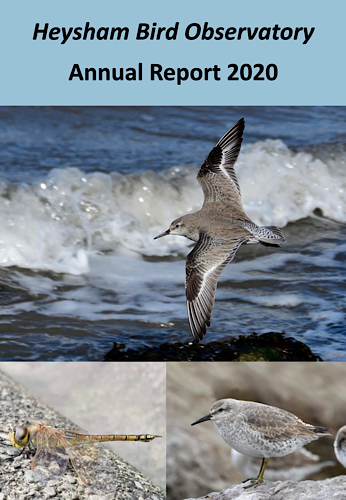 Normally the report is only distributed by purchasing a hard copy, but obviously, that's impractical this year. A lot of effort has gone into its compilation, full credits are inside, in a very difficult year. It would be a shame for it not to be read by as many interested people as possible. A link for future reference will remain attached to the top of the sidebar.
It was a strange day weather wise, a mild night followed by a very misty day, but once or twice the sun broke through and it was very pleasant. Very light winds starting in SW but ending E, almost breathless at times.
South sea wall
Rock pipit 2 one on Red Nab and this one getting territorial near the nest site by the lighthouse
Grey seal 1 No.2 outflow.
Nothing on the outflow structure again. "Throbshire" sent a comment yesterday suggesting the rails may be covered in anti climb paint, which remains sticky (see link in the comment at the bottom of yesterday's post). This is certainly a possibility, although the paint does look normal from the wall. However, there was a period several years ago, when they were struggling to keep anglers off the structure, perhaps it was done then. Anyone know? Either way I'll have a good look next time - Thanks.
Heysham skeer
I really enjoyed this walk, not so much for what I saw, but the lighting was amazing and visibility alternating from nothing in one direction to good in the other. (MD)
Red-breasted Merganser 3
Great Crested Grebe 1
Eider 80+
Goldeneye 1 male
Dunlin c30
Knot c1,500 - again harried by a juvenile Peregrine for a while. Later another Peregrine attacked, but this was much more clinical, and effective. I couldn't tell if it was an adult or if the juvenile is getting better.
Pale-bellied Brent 15 - at 14:30 there were just 3 in the corner of the emerging skeer, they made their way to the central pool on the skeer. At 14:40, 4 birds flew from the south but flew straight past further north. At 15:40, 8 more arrived and started feeding in the corner. These included a bird with two white rings, almost certainly the same one read the other day. Then at 15:45, 4 (returned?) from the north and joined the others.
Finally, when I walk on the skeer, I feel as if I own it, it's mine! But I'm not the only arrogant so and so out there, this Carrion Crow obviously feels the same way and always confronts me. It will sit on the nearest promontory (this one less than 5m away) and give me a good cawing, till I move on. I suppose, because I always do move on it believes that it has seen me off, and will continue - I hope it does.
Posted by Pete Marsh at 18:51 1 comment: