No wind blown stuff, but not too bad

As forecast last night's WSW strong wind veered to WNW and began easing by 09:00. Quite a bit of sunshine in the morning.
South shore (SC and MD)
Shaun had made an early start, but the only thing he managed over the sea, were a flock of 14 Pink-Footed goose flying in, later there was a single bird milling around close inshore.
Pale-bellied Brent Goose 51 - 09:05 they flew high over Shaun's head at the lighthouse on their way from the north side to Red Nab. At 09:45 they flew from Red Nab towards Potts corner. (Later in the afternoon  there were at least 17, including the Canadian ringed birds, out from the children's play area).
Wigeon c160
Shelduck c30
Shag 1 juvenile showing well in the harbour
Rock Pipit 3 including the ringed male and presumed female at the lighthouse nest site.
You can read the ringing report of this and Thursday's bird on the North West Gull Project wbsite
https://www.nwgulls.org.uk/207-2021-gull-ringing-report
Mediterranean gull 1 adult behind lunchtime ferry - ref Jean
Middleton Nature Reserve
Gadwall 37
Wigeon 2
Tufted Duck 2 male
Shoveler 4 (2 mature males plus 2 female)
Coot 1
Moorhen 9
Little grebe 1
North shore
Howard managed to to read several ringed Knot on the Heliport at high water, despite occasional disturbance from a Sparrowhawk. These are just three of his images, as ever, you will need to open these to see the ring detail. 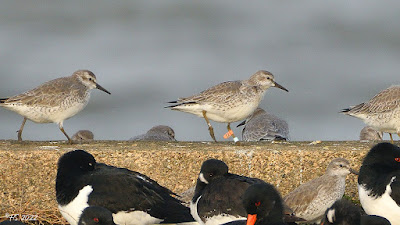 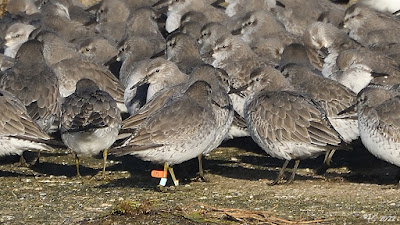 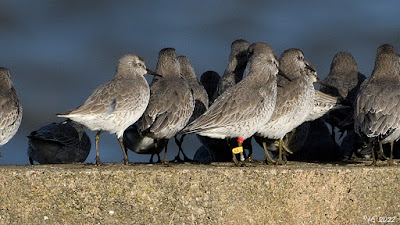 Heysham skear - late afternoon
Eider c80 - this clip of a mature male shows just what a splendid bird they are when seen up close.
Great Crested grebe 4, 2 in summer plumage - this clip shows the difference between a bird still in winter plumage and a more extravagant summer plumaged bird.
Knot c1,000, lowish numbers probably influenced by........
Peregrine Falcon 1
Bar-Tailed Godwit small flock of 10 on waterline before flying off north. They were already skittish and it seems that the click of my camera was the last straw - it is getting a bit worn!
Posted by Pete Marsh at 20:34 No comments: