A bit of barrel bottom scraping

Very little is happening at the moment, and few people watching it not happen.

The Lapwing numbers on the saltmarsh have swollen to three. Presumably failed breeders. 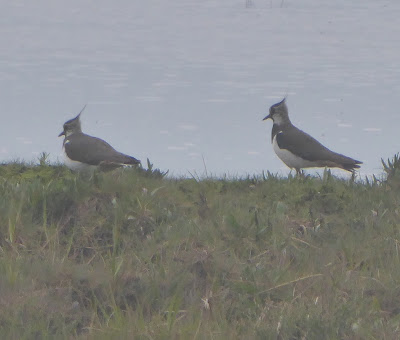 Having said that little is happening, this is potentially very exciting, but only if you are into marine biology (MD).
In 2013 the south wall and its extension out to sea was designated a Bass nursery. The warm outflow waters support Bass all through the year. All fishing in this area is prohibited. There has always been bass visiting the bay in summer, but it was not known where they bred or where the young developed.
About 5 years ago I caught (and returned) a 7cm bass in my shrimp push net. I'd never seen a young one before.
Today when the tide was flooding on the south shore the water was boiling with small fish between 7 - 10cm. Normally gathering like this are Grey Mullet. But mullet are basically herbivores and would either be grazing the algae off the mud or the protein laden spume off the surface. There was neither of these food sources today. These fish were hunting, presumably invertibrates flushed from the sea grass by the rising tide. They were in less that 2cm of water at some times, they were the right shape and colour for bass, but I couldn't see the distinctive dorsal fins (mullet tend to swim with the top of their dorsal fin out of the water, when in shallows). They must have been young bass, hundreds of them! I've never seen this before, it can't be a regular event, or the egrets would be waiting for them. That said I'll check again tomorrow 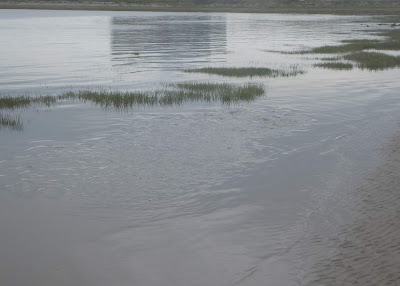 .
This is the typical area they were feeding. 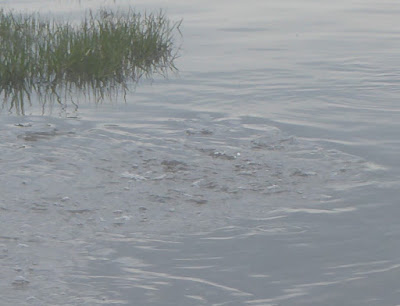 This is a close up of the same image showing the water "boiling" - bass are a very slow growing species, fish this size would be 4/5 year old.

Just an aside. The Sea Holly seems to have taken a battering with this year's storms. There are normally plants at the top of the shingle around the saltmarsh, Red Nab and Half Moon Bay. But the only specimen that I am aware of at the moment, is this one further inshore near Red Nab. 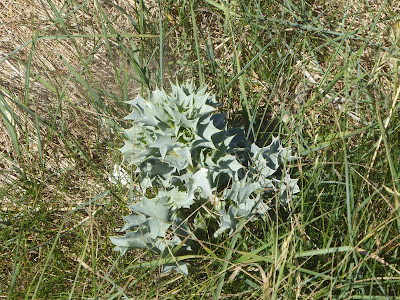