It started off damp but quite bright, but by 10:30 it was quite dark, the rain started about 11:00 then light rain on and off after that. The east breeze shifted to NE during the day.

Black Redstart 1 female/immature - Pete(M) managed to scope this from the saltmarsh slipway. It flew up the pretend castle like structure to the south of Ocean Edge, flashed its tail and landed about half way up (n.b. This is a correction from the original post when I thought it was seen on the shore). This is the very edge of the south shore observatory area. Also:
Merlin 1 female
Sparrowhawk 1 1st calendar year male
Mediterranean gull 1 adult behind the ferry.
There were 11 colour ringed Knot read on the heliport. Hopefully some histories later.
South shore either side of high water (MD)
I don't know what the Redshank are feeding on at the moment, but both yesterday on the skeer and today on Red Nab, birds were taking to the water to feed. 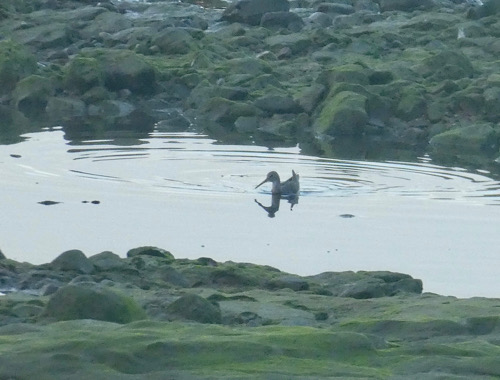 At 8.6m today's high water just about covered the mud out from the saltmarsh. There were still mudflats exposed further south towards Potts Corner. These were "full" of waders. But as the tide ebbed more and more of these moved to the mud in front of the saltmarsh (suspect Pete's raptors might be a factor). I started with accurate counts, then as more and more came in it became impractical. These are the approximate numbers by 10:30 (just 30 minutes after high water)
Grey Plover 80
Dunlin 1,360
Ringed Plover 10
Bar-Tailed Godwit 200
Redshank 30
Strangely no Knot
Pink- Footed geese were active in both directions
09:31 - 23 south
09:33 - 68 north
09:43 - 57 NE
10:35 - 74 south
11:30 - 120 south
This Redshank has only one leg. It isn't just resting one. 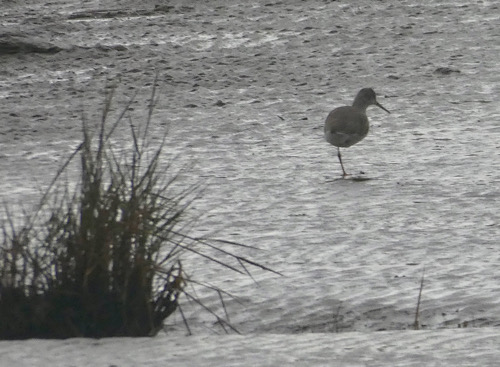 I'm posting a short video of it feeding, not for entertainment, but as a demonstration of the adaptability of nature, and of this particular bird's tenacity. (If the video doesn't open first time, try again later)

It seems accustomed to feeding this way, and is obviously successful. Whatever happened to its leg, must have been a while ago, possibly it was born with only one leg. It may struggle in cold weather though, they normally keep their feet warm by alternating which they stand on and warming the other under their feathers. But I'm sure it will have developed its own way.