With his intimate knowledge of the shore off Heysham, Malcolm went out on to the outer skeers, next to the Kent channel (don't think he quite needed a Cumbrian passport!) during a daytime low spring tide opportunity a few days ago.

1. This is a mile and a half out looking back from the southernmost end of the furthest channel (the gunnel) that you can reach from shore. It's looking back towards your vantage point on Knowlys road. You'll notice that the old waste pipe marker is in between, making this your line of sight out for Eider. 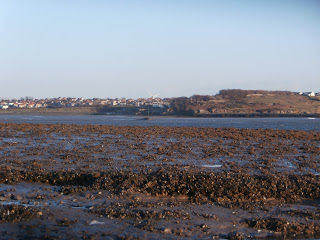 2. This is the view in the opposite direction, looking straight into the gunnel, where this group of Eider were feeding. I didn't see the Velvet Scoter, but there were three Scaup.  All the birds were feeding frantically just before the run stopped.  There were five groups of Eider about the size of those on the pic, all feeding where the water was running through sub channels. Plus loads of smaller groups. No divers and just one Merganser. 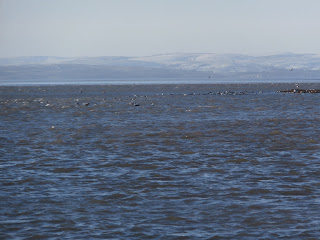 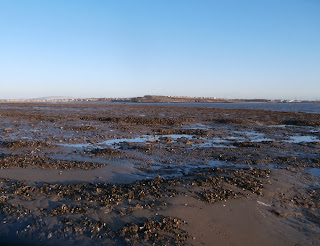 Pic 1. This is similar picture to the one I sent earlier, looking back to Knowlys Road, but not zoomed as much. In this one you can see in the foreground what the sea bed typically looks like at this range. I.E. No living mussels, just empty shells and small clumps of honeycomb worm. 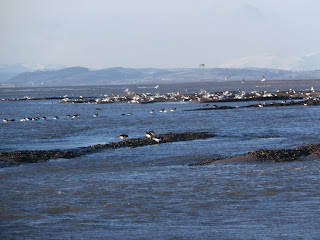 Pic 2. This shows the small islands of live mussels in the main channel (gunnel). The Oystercatchers were going into the water to access these before they were exposed, and avoid being harried by gulls. Obviously prime feeding area for mussels. 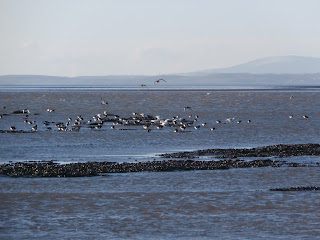 Pic 3. This is similar, but if you zoom in on the upper middle Oystercatcher flying away, you can see the size of the mussel they were "catching". They all flew away from gulls to eat elsewhere. 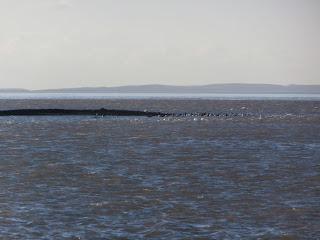 Pic 4. This is just another picture of where the Eider were feeding, but it makes sense now. They are feeding on smallish mussels that the force of the water through the channel is dislodging from the mussel island beds. That's why they congregate where the flow is strongest just to the south of the island. Every island in the flow had a group like this.
This will be the time of "easy feeding". I.E. Plenty of available food, you just have to be the first there. Hence the frantic feeding. Dislodged mussels not eaten will get washed further south and spread over a large area. Presumably this is the food source earlier in the ebbing tide or early in the flood tide.