Overhead disturbance, but not a bad day

It started cold with light northerly winds which quickly drifted to the east, before swinging round to SW by evening. Dry with some prolonged sunshine.

Almost a Grass Frost !!
The temperature was 4 degrees at 05.30 this morning and I was expecting the guy cords and poles to be frozen, but fortunately they weren't.

The catch was very low with almost no warblers. Five more Grey Wagtails caught and colour ringed however - three further birds were seen but did not end up in the nets. Two of these did perch on the top of a net but decided to fly away again.

The only other captures in four hours were singles of Chaffinch, Blue Tit, Common Whitethroat, Reed Warbler, Lesser Whitethroat and a retrapped Cettis Warbler.

South shore (MD)
Early to mid morning on rising tide
Merlin 1 juvenile must have been resting on Ocean Edge foreshore rocks, it flew low (below me) towards Red Nab. I tried to relocate but it must have carried on or gone into the Power Station.
Wheatear 1
Rock Pipit 1
Linnet c30
Little Egret 12
Grey Seal 1
There were Mediterranean Gulls on Red Nab, but I didn't attempt to count them.

Waders:
Again, the plan was to let the tide bring the waders close as I waited on the mud out from the saltmarsh. At 8.1m the tide was a perfect height for this viewing technique.
There was some sort of gathering on the mud out from Potts Corner, this involved flying microlights around. This had two effects on the waders. It had herded between 5,000 to 7,000 to the corner out from Ocean Edge, which was good. But it also made them very flighty, which wasn't.
Unfortunately, before I was close enough to check them out in detail a Peregrine came hunting. It lifted everything, and they flew off towards the estuary (later the Peregrine returned with a godwit sized capture).
This is just a small fraction of the fleeing birds 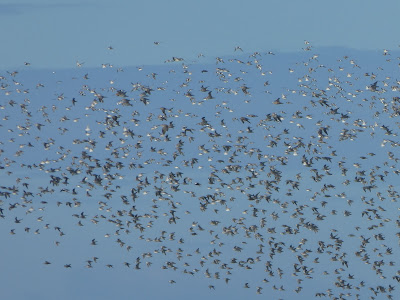 The bulk were Knot and Grey Plover. But there were also Bar-Tailed Godwit, Curlew, Dunlin, Golden and Ringed Plover, Redshank and Oystercatcher (not all on this frame)
I say the Peregrine lifted everything - this Knot seemed oblivious to the mass departure!

Fortunately a few wader that were feeding nearer the saltmarsh hung around.

This Golden Plover on the left is a juvenile, based on its constant peeping to be fed.