Heat haze from the east!

Velvet Scoter - fortunately wing-flapped late afternoon as the heat haze was bad from the north wall!
Chough - second field above the café mid am at least
Iceland Gull - south end of harbour lounging around most of the day
Stonechat - the females at Ocean Edge saltmarsh and half moon bay shore were still present
Rock Pipit - one Red Nab
Bar-tailed Godwit - 30 both yesterday and today off the north side

Pleas don't send in Black-headed Gull yellow TM1C which is hanging about the Iceland Gull area to the BTO or Polish ringing headquarters - its a Polish ringed bird and if you let me know you have seen it I'll pass on the ringing details and give the Poles a list of observations and recorders at the end of the winter when it will presumably clear off.  Thanks for the pic and latest report, Mark 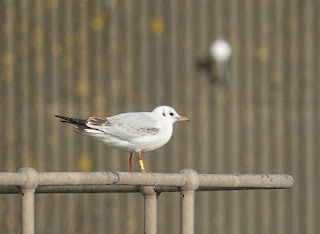