West to WNW fresh wind. Overcast all day with a few showers.

Mainly stuff from my check of the south shore (MD)
I had a quick visit at high water to see if there was anything roosting on the mud, there wasn't.
Just Red Nab to Saltmarsh checked.
No Mediterranean gulls seen on Red Nab
Rock Pipit 1 on Red Nab plus 1 on foreshore (also 1 on Near Naze, checked on way home)
Linnet 2 on saltmarsh
Little Egret 7 - 1 on Red Nab plus 6 on saltmarsh
These are five of the saltmarsh birds, the clip begins with a Curlew and a Redshank
I returned 3 hours after high water to watch the beach near the wooden jetty become exposed.
Shag 1 resting on the wooden jetty
Mediterranean gulls 11 minimum  (3 adult plus 4 juvenile near jetty  - Pete also saw 7 adult or 3cy roosting on Red Nab).
It started off looking promising as the three adult and two juvenile were already waiting on the water before the beach was exposed, unfortunately only joined by two more juvenile when they started "feeding" (inverted commas as I didn't see them catch any Sandmason worms)

This is one of the juvenile trying to catch Sandmason worms, yow can see the end of their tubes poking out from the mud.
This is the history of the German ringed bird seen last week 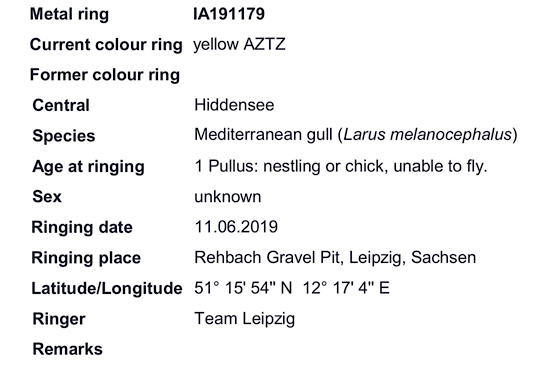 It was surprisingly cool, I was wearing my winter coat! Even so, there was some butterfly activity in the Nature Park.
Meadow Brown 4
Gatekeeper 2
Small White 2
Large Skipper 1
Common Blue 2
In this clip you can actually see the white wing border coming away from the very worn Common Blue.
In contrast, the other male was very fresh
But today's star is behind the butterfly, the green beetle. Unfortunately, my image isn't really good enough for Alison to confidently identify, but she suspects it's  a Thick-thighed Flower Beetle Odemera nobilis. Much too good a name not to use! If you wonder why they are called this check google images!
Posted by Pete Marsh at 20:48 No comments: