South shore
Both myself (MD) and Kevin checked the sea for any wind blown stuff, but they either didn't arrive or were too distant for binoculars.
Wheatear 1 on Red Nab
Rock Pipit 2 on Red Nab and foreshoe
Mediterranean gull - at least 15 at low water. Minimum 11 adult/3cy on beach next to wooden jetty, 3 juvenile on seaward end of No.1 outflow and 1 adult/3cy out from the harbour mouth.
Later they were more spread around. This bird came from the noth side and settled just out from the harbour.
I like this clip, there was at least one Mediterranean gull resting with the Black-Headed gulls in the lea of No.2 outflow (just right of centre on the clip). Everything was relaxed, then a new BHG arrived and moved on another that was, "sat in my spot on this beach"......... A behaviour previously only witnessed in humans!
Sheltered from the wind it was very warm. There were lots of insects in the nature park behind Red Nab.
Kevin took this nice shot of a Painted Lady.
There were also:
Red Admiral 3
Peacock 1
Comma 1
Large White 2
Small Tortoiseshell 3
Common Blue
Speckled Wood
Gatekeeper
Plus a trio of Hawker Dragonflies
Migrant Hawker 3
Brown Hawker 1
Southern Hawker 1 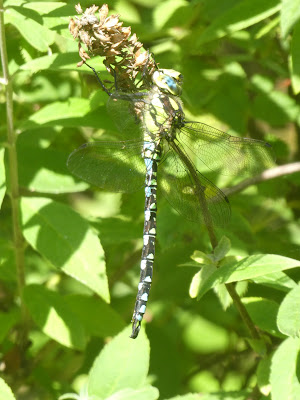 I have received a very interesting comment regarding Wednesday's post of the mass exodus of the Oystercatchers. My thanks to "Throbshire", sorry I don't know any other identity.

I can offer you a possible solution to your exodus question. At about 10.00 on Wednesday my wife and I saw a big bird of prey heading towards Walney, roughly on a line from Heysham Sunny Slopes. Too distant to be 100% sure, but thought it was probably an Osprey at the time

So, this seems to be the final piece of the puzzle, just as the tide was moving the Oystercatcher from the outer  skeer, a large raptor, probably an Osprey drove them all to the south side. I do like it when evidence emerges to support a theory. Although evidence to disprove a theory is also good, much better than not knowing. (MD)