Dark-bellied Brent and fed up Stonechat

All of today's images, except mine (MD) are high resolution and should be opened to see the superb detail.
First a report and pictures by Howard from yesterday:

Here are a few images from my visit to the Heliport and the Lighthouse.

The heliport was very quite with no Knot present maybe due to the Peregrine patrolling the area. 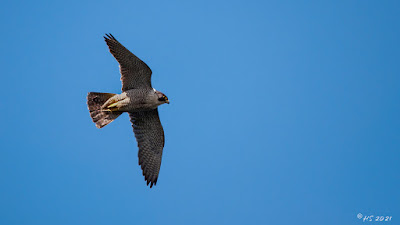 A female Stonechat was seen on the Helipad but to far off camera to snap.

I had a visit to Red Nab and the Lighthouse snapped the Turnstone on one of the outflows. 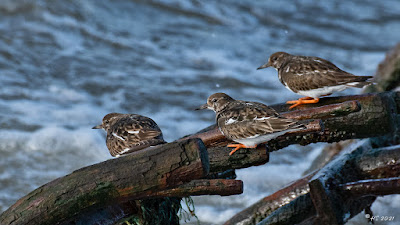 The Rock Pipit at the Lighthouse area, I watched it for a good hour

-
Today - A overnight ground frost and clear and sunny for most of the day. Pleasant in the light SSW wind.
An interesting day with several birds seeming to ignore observers, allowing some nice close ups. Not so the Stonechats, which often do provide decent close viewing opportunities, but not today (that's not why they were "fed up", more on that later).
Pale-bellied Brent goose - 22 out by the children's play area 09:00. But none moved on to Red Nab. On Wednesday the group of 7 moved to Red Nab, but didn't return. Yesterday the group of 15 tried it out, it obviously didn't impress them either. Perhaps the warmer weather will allow the gut weed to grow, faster than it's currently being cropped by the Wigeon.
Dark-bellied Brent goose - 2. In the SE skeer corner at 15:30.
There is absolutely no weed remaining here, and they quickly moved on
All the way back to the west side of the bay, I think. I tracked them west until they were out of sight.
Heysham Nature Reserve
This reserve is woefully under recorded since Covid restrictions and new volunteer guidelines have prevented ringing and routine visible migration checks. Shame, it is a good reserve and does produce some excellent records.
Reuben has the first recording area butterfly record this year - Small Tortoiseshell 1
Janet took these shots:

South shore
The Wigeon are feeding nearer the sea wall, partly because of lower than usual human activity, but mainly because that's where the gut weed is slightly longer.

Rock pipits 7. This is one of the two lighthouse birds. It totally ignored me. At one point in this clip it was less than 2m away. I had to zoom out to keep it in frame, you can hear the click of the motor, the pipit also heard it, looked at me, carried on, then came even closer!
Similarly, this juvenile Cormorant was resting on the sea wall and refused to take any notice of me. I don't think there was anything wrong with it, when I looked back later, it had taken to the water and was swimming away.
Stonechat 2 - a male and a female were on/around the saltmarsh. Basically, the female was on the saltmarsh
The male was catching food and taking it to her.It then caught and took two worms
I couldn't see if she ate any of these, but either way after this the feeding stopped, presumably both fully "fed up", and they rested together on the saltmarsh perimeter.
Finally, it was a bit hazy this afternoon, the low dew point and the low light made the water vapour in the StenaLine's exhaust make it look like an old steam ship.
Posted by Pete Marsh at 20:25 No comments: