Another ridiculously warn sunny February day, eventually led to a brief sighting of a dragonfly, flying low over the pebbles on Half Moon Bay beach at 15:15. The description is compatible with a female Vagrant Emperor (albeit a small one), but unfortunately not conclusive. The insect was only seen for a few seconds before heading off, still low, to north. Efforts to relocate failed and tomorrow's weather does not look promising.

Snipe over a 100 flew from rocks in front of old heliport as the tide covered the rocks. All flew onto the heliport grass. Most of the rocks were still uncovered then so it is presumed there were many more. 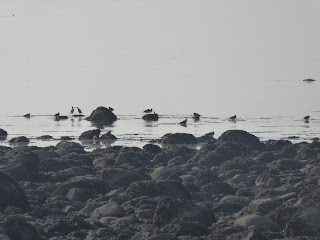 The flatness of the incoming tide and the slow rising (low neap tide), meant the waders were reluctant to leave the rocks!
Posted by Pete Marsh at 22:35 No comments: