Heysham Obs
Just a few leftovers today as the wind went firmly into the north. Late yesterday afternoon produced what seemed to be a routine darvic-ringed Kittiwake, expertly 'nailed' in flight by Janet.  We ended up sorting out not just the Heysham sighting but also an additional sighting at Seaforth.  It's about 24 years old.  However, we have been urged to exercise caution here as it seems unlikely that the original darvic ring would have lasted for 24 years and there is a possibility that it was a re-ring/duplicate.  This is why the 2008 sightings is probably very important, acting as an interim sightings of what was certainly metal-ringed bird on the other leg.  Hopefully it will not turn out like the example a few years ago from Heysham Harbour of what could only be "traced" to someone putting a pigeon-type ring on an easily accessible nestling on a pier or whereever: 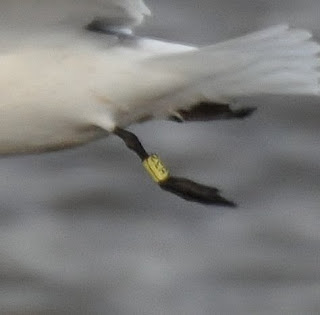 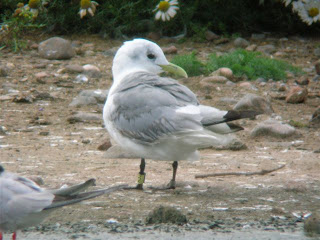 Top = One of two shots used to try and determine the ring number at Heysham yesterday.  Thanks Janet.  Bottom = the pic taken of the same bird at Seaforth on 23/8/08.  Thanks Gavin

North harbour wall
Twite - 81 min
Linnet - at least 5
Goldfinch - at least 7
Great-crested Grebe - 10 visible, including a gang of 8
Kittiwake - 350 gulls far offshore included a tight cluster of 37 sitting on the water which all seemed to be this species - the rest (more scattered) mainly flying birds appeared to be Black-headed. Single adult by the waterfall
Med Gull - 2 adults behind outgoing ferry
Rock Pipit - 1 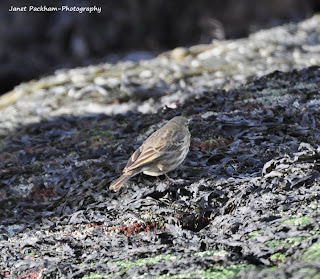 Outfalls
Little Gull - 8 (5 2CY) on a quick long-range check but could have been others resting on the mud﻿
Posted by Pete Marsh at 14:02 No comments: