Whoopers on the move

Another overnight frost, but it quickly warmed in the sun. Almost breathless again, what little breeze there was came from the NW.

South shore
Whooper swan c33 - at 10:30 a flock of 27 came in from the south. There is no wind noise on this clip, if you turn the volume up you can hear them calling.
They landed on the sea out from Red Nab, they didn't call as they were landing
They were a long way out...
Stephen Dunstan also picked them up from Cockersands and tracked them after they landed. They drifted out towards the middle of the bay, by the time they took flight again they must have picked up another small group as there was now c33. They headed NW and disappeared from view between Barrow and Ulverston.
Grey seal 1 out from the outflows
No reports yet of any land bird movement
North shore on the ebbing tide
Red Throated Diver one in distant channel as viewed from the north wall. It flew in then landed before drifting out.
Black Headed Gull - German ringed A690 near children's play area (not 690 count as per original post)
Eider c100
Red-breasted Merganser 6
No Knot on the skeer, perhaps they were waiting for the outer skeer to become exposed.
Little Egret 4
This one was fishing and eventually managed to catch something small, probably a goby.
There were 5 Black-headed gulls on No.2 structure today. Wind, or the absence of it, is clearly a key factor. On new year's eve I set the challenge to resolve this, erstwhile, conundrum by the end of the year, two months in and headway is being made, but some of the magic of the mystery has gone! 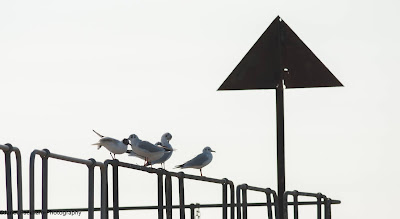