First light and out

An eleven bird first round then half a dozen dribs and drabs and then that was it as regards landbird migration through the mist nets.  A quick round the houses produced a couple of interesting sightings but nothing to suggest any further effort other than checking the turning tide in about an hour 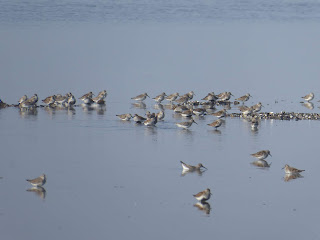 Where are the migrating hirundines!! - none seen last two mornings