The strong SW wind continued till mid afternoon when it started to ease off. Largely dry with just a couple of showers.

Little gull 1 adult was out from the harbour mouth mid morning, in association with the dredger. Unfortunately, it disappeared after the dredger left to discharge its mud.
Nothing else reported from the sea.
Wheatear 3 males on Red Nab
Rock pipits 6 (2 Half Moon Bay beach, 1 Red Nab, 1 sea wall, 1 lighthouse and 1 waterfall)
Wigeon 8
Shelduck none seen
Red-breasted Merganser 3 on/around Red Nab 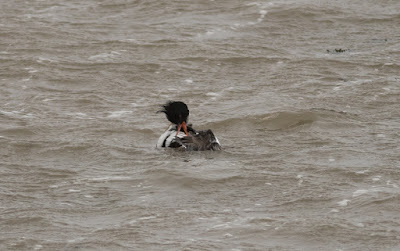 Yesterday I discussed flotsam, today jetsam gets a mention. Although at one level this is nothing to do with nature, things like this make me try to understand what's going (gone) on and understanding the nature of the sea is partially required (MD)
I was walking towards the low water line out from Half Moon Bay. In the distance, something was lumbering out of the water (Walrus was my first thought/hope!). Optics revealed it to be an old 40 gallon drum!

The final, strange thing is that there is no wear on the rope knots. The ropes must have been tied to drum after it was worn, or whatever was wearing the middle of the drum, didn't reach as far as the knots. Intriguing, I've said it before, but I do like a mystery!  I have two theories, neither provable. Unless someone out there knows something.
Posted by Pete Marsh at 20:34 No comments: