Iceland Gull - 3rd W only after c1250 when tide had dropped low enough for waterfall to be visible - absent earlier but couldn't see whole of Fisher's roof
Pale-bellied Brent Goose - two off the children's play area at north end of horse fields, visible from Knowlys road i.e. usual place, but again only on the dropping afternoon tide
Chough - 2nd field this am
Med Gull - adults Fishers roof (Czech?) and at Knowlys road skeer near the Brents
Stonechat - female OE saltmarsh
Eider - at least 420 but nothing with them
Great-crested Grebe - 2 offshore
Green Sandpiper - again on the shallow flood by the first roundabout on the bypass - seen from eastern fringe of recording area c1430hrs
Kittiwake - 2 +5 out (bit unexpected)
Coot - Equal first rarest bird in the area on Middleton: 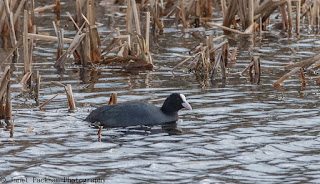 Gadwall, Teal and Oystercatchers also taken by Janet on Middleton: 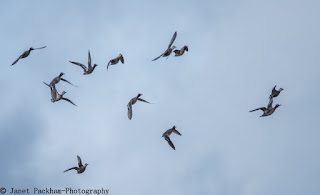 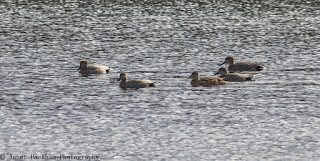 Thanks for these great pics Janet
Posted by Pete Marsh at 14:07 No comments: