Iceland and Glaucous on the same day

We have got our act together a bit earlier than usual and, as can be seen in the sidebar, the 2017 report is available at £3.  This is basically a cost-covering exercise of a limited production, printed by a commercial printer (Pagefast).  There will be no reprint as it is cost-prohibitive to do a small print run so we advise you purchase early.

Today seems rather good, but try telling that to the mid afternoon observers as all the harbour area offerings went awol. 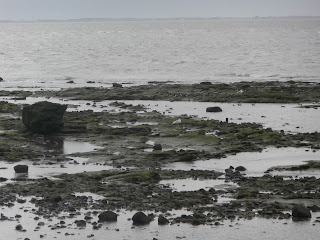 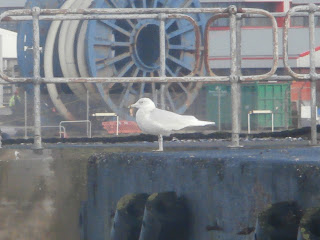 Glaucous Gull - Juvenile following the IOM ferry into the harbour mouth 1215ish then apparently flying out again (as per observer near the lighthouse) as many ferry followers do.  Looked a darker bird than the previous record seen in exactly the same light/circumstances from the back of the harbour.  It was reported on the pager again at 1250hrs when one of the freight ferries was coming in but it certainly was not in viewing range from the back of the harbour at that time.
Shag - Juv around the harbour mouth/inner end wooden jetty on and off, more on in the morning and off in the afternoon 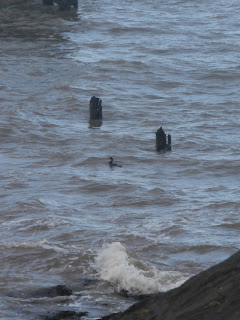 NB  The Black-throated Diver is taking the micky.  It is obviously a higher life form than Fylde and Heysham Obs year listers and is toying with us.   Today it decided not to leave Blea Tarn Reservoir until it was almost dark at 1715hrs and took a line which would, in normal daylight, have sent it overhead easily visible from eg Knowlys Road!  The departure from Blea Tarn was about 1.5hours later than yesterday (see thread LDBWS site)