Lightish cold winds from the north, showers increased throughout the day.
There have been a very impressive total of 87 ringed Knot read and identified so far this year. The main observers are Richard Du Feu, Howard Stockdale, Jean Roberts and Pete Marsh (apologies if I have missed anyone).
Pete took this photograph today. 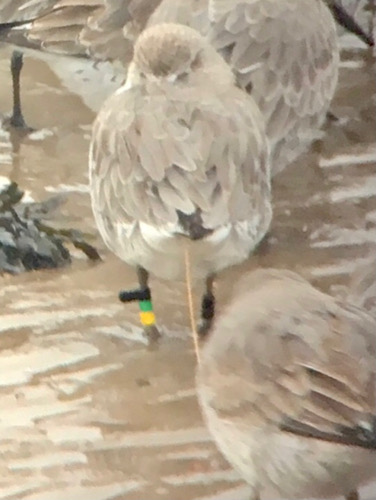 N3GYNN - a Dutch ringed knot with aerial for tracking its movements whilst moulting in Holland before heading west for the winter. Also seen here in mid- November.  Presumed to fly straight to Holland to moult from Greenland breeding grounds.

I was going to show the spreadsheet to date, but it is still work in progress, so not just yet.
Other than this it has been a quiet day.
South shore
Rock Pipit 2
Wigeon 180
Earlier in the year, I showed how I (MD) string peanuts out to feed the Jays in my garden. I did comment at the time, that one of the "downsides" it that they also attract the occasional grey squirrel (only a downside, if you don't enjoy being entertained by a squirrel on a bleak winter's day - I do). Anyway, today's visitor hit the jackpot as the whole string came off. After trying to put them all in its mouth, including the wire, it shot off.
Finally, to continue our theme of  "interesting dredger pictures".
Posted by Pete Marsh at 19:58