Strong WNW wind largely overcast, but a few sunny spells and the odd light shower.
Heliport area,
No Knot early on, but a flock arrived late in the tide allowing Howard to read three more ringed birds.
I say we saw sea birds. It was Howard who saw one. A partially summer plumaged,  adult Red-Throated Diver, feeding in Half Moon Bay towards high water. 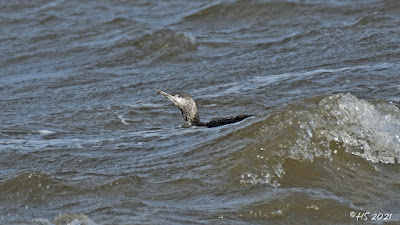 A check along Half Moon Bay and Heysham Head shore, to see if it was still around failed, but did locate:
Rock Pipit 3 - 1 Half Moon Bay plus 2 around the Head.
South shore late morning (MD)
Wigeon 99 arrived at Red Nab as the tide reached it. Later 59 out from the saltmarsh
Rock Pipit 2 - 1 each saltmarsh and Red Nab
Greenfinch 44 - 11 Red Nab + 33 saltmarsh
Reed Bunting 4 on saltmarsh - first records here this winter
Common Snipe 5
Jack Snipe 1
Kestrel 1
These Redshank were "playing" chicken with the waves along the sea wall - there was ever only going to be one winner!
The other sea bird was, as predicted, a single adult Kittiwake out. Seen by Pete whilst checking the outflows.
Posted by Pete Marsh at 21:02