Only our second Lesser Redpoll from Hampshire

Red Nab and saltmarsh
Again, just a quick look at high water
Wigeon 100+
Rock Pipit 1 on Red Nab
Greenfinch 25 on Red Nab
Dog walk pond
Kingfisher 1 - this was very satisfying (MD). Last night I was thinking about the occasional sightings on Red Nab, and reasoned that it must be based somewhere nearby. I then remembered the small pond along the dog walking track (between Heysham Nature Reserve and the nature park behind Red Nab) had plenty of small Rudd/goldfish hybrids with low branches over the water. So I had a look this morning, and there it was, waiting for me!
This track is very popular with dog walkers, and the Kingfisher has become somewhat tolerant of people in the vicinity, and so allowed me good views. Unfortunately the overnight frost meant the fish were deep and it didn't catch anything whilst I was watching.
It will only be easy to catch fish on Red Nab when the tide is of such a height as to make the freshwater stream sufficiently saline as to allow sea fish to venture along it, but not so high as to have no feeding perches available. So presumably it only goes there when conditions are favourable or if the dog walk pond freezes over. Hopefully it will hang around for the rest of the winter, at least.
North shore
Pale-bellied Brent goose 33 (same maximum for three consecutive days)
I walked out to the skear from Knowlys Rd and passed the children's play area on the seaward side, there were at least 17 in the same area as yesterday at 13:30. I didn't go near as someone was photographing them, it later transpired that it was Kevin Singleton who provided these excellent shots of the two Canadian ringed birds: 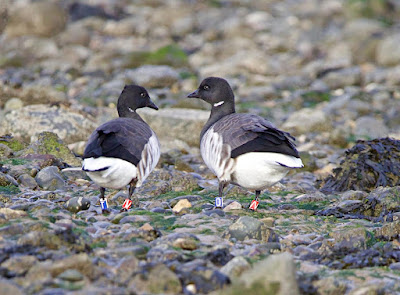 There were another 11 in the skear corner at 13:40, but they quickly headed back to the play area.
But by 14:40 today's higher tide had gone out far enough to allow the area of sea lettuce to be shallow enough to feed on. All 33 Brent were on the water in the skear corner and upending to feed on the lettuce. There isn't a great deal here, but still obviously preferable to gut weed. This is a group shot to show location, but the shore is much further away than it appears. 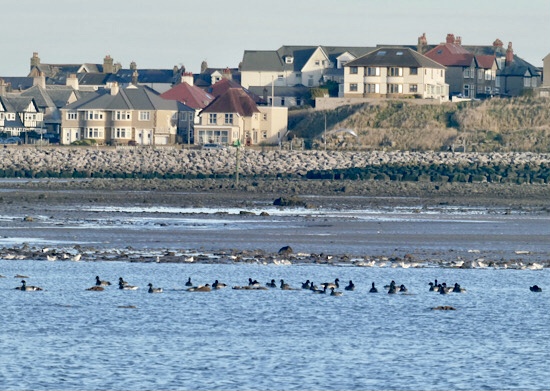 This clip shows the closer in birds feeding, while the others are waiting for the tide to drop a little further.
The tide still had 90 minutes to ebb, so this sea lettuce bed would be fully exposed. It is quite sparse already, and not very extensive, but will probably be enough to feed the Brent for this set of spring tides. So the likelihood is that they will continue feeding near the play area, but will leave as this area becomes available. Fortunately for shore based observation, but not the Brent, most of the time that this area is exposed in this set of tides will be in the dark.
Eider 150+
Red-breasted Merganser 3
Great Crested grebe 7
Knot c350
Shag 1 juvenile - it was sharing a rock with a Cormorant
The Shag left, not long after the Cormorant and flew quite a way to feed with a group of cormorant to the NW of the skear. This clip isn't really up to much, as it is a poor angle, but might help those of you not familiar with a Shag in flight (including me! (MD))
You can see the typical "pot belly" and the low flight with steady wing beats , not the regular glides like a Cormorant.
Finally Kevin Singleton also sent me these shots, they are "only" Carrion Crow, but nice to see them in such detail. 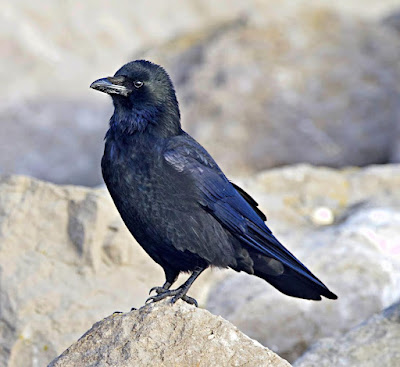