Light early east breeze freshened slightly and moved more SE. High cloud and hazy sun. At 18:30 the wind suddenly turned round to the SW bringing in heavy cloud for the anticipated overnight rain.

We set four nets at Heysham NR by 06.30 this morning. Although the wind was much lighter than forecast the sky was open and grounded night migrants were not expected in numbers. However, this favoured passage Redpolls and a decent total of 22 was caught, including another one ringed elsewhere.

A Chiffchaff wearing a French ring was trapped and processed.

Birds trapped and ringed were:

Chiffchaff 2 plus one retrap plus one ringed elsewhere

Blue Tit 1 plus one retrap

Lesser Redpoll 21 plus one ringed elsewhere

Pete Crooks paid a visit this morning, this is his report posted on the Lancaster & District BW Site (see side bar for links to the site):

Heysham North Harbour Wall (7.25 – 10.10 am)
The ‘highlights’ of a sea-watch on the early rising tide comprised
1 Razorbill
1 Guillemot
2 distant unidentified auks
6 Sandwich Tern
1 Whimbrel
A very distant possible dark morph Arctic Skua was mobbed by an immature gull, but disappeared into the offshore haze.
A trickle of passerine ‘vis mig’ included
3 Tree Pipit (a single group at 7.30 am)
17 Linnet
8 Pied Wagtail
5 Meadow Pipit
3 Goldfinch
2 Redpoll
2 Swallow
3 Carrion Crow.
2 Rock Pipit at Near Naze
I walked the waterline at the same time as Pete was checking from the wall, but I only managed the Sandwich Terns. The only overhead passage was a single Pied Wagtail . I did manage this clip of a grey seal, it is just finishing off a reasonable sized Bass (MD)
Kevin also checked a bit later and took this shot of an Eider pair, you don't often see the female plumage as clearly as this.
There were two geese species using the main pond at Middleton, before it became too busy. Janet took these shots. 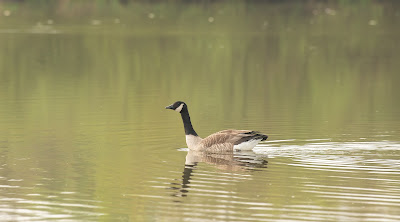