Still some stuff through the gloom

Light SSE wind with very fine rain reducing visibility. By evening the rain stopped and the breeze drifted to SSW, before easing to nothing.

Seawatch report from Pete:
Sea 0820-0920: Bit of sea action off north wall despite poor and variable vis:
dark Arctic Skua out
4 Arctic tern
blogging Common Tern
5-7 Sandwich Tern
4 Gannet
a couple of Whimbrel in 40 mins.  Then nothing for rest of hour other than 5 swallow in poor vis.
Earlier Pete Crooks had
two Common Sandpiper
one Wheatear.
No coverage by me of anywhere else other than north wall
Grasshopper Warbler reeling on Middleton Nature Reserve - ref Janet
South shore mid morning on rising tide (MD)
Wheatear 1
Little Egret 3
Whimbrel 7 (1,1,2,1,2) moved from feeding areas by rising tide, most ended up on Red Nab
No other waders except for Oystercatcher
Rock Pipit just 1 on Red Nab, no sign of lighthouse birds
Linnet 7 near lighthouse including one female collecting nest material. There have been two on territory a while.
This Lesser Blacked-Backed gull was also collecting nest material.
Shag 1 2nd calendar year on wooden jetty
Grey Seal 1 out from harbour mouth
The persistent light rain encouraged this Sea Slater to make a hazardous crossing of the sea wall.
Heysham skear - low water 19:25
Eider c50
Great Crested Grebe 4
Red-breasted Merganser 6
Shag 1 2nd calendar year - this clip starts with the Shag, two Merganser and two Eider, within a few seconds they are all gone!
c400 large gulls, mainly Herring feeding on the seed mussels
Whimbrel 8
Turnstone c120
Dunlin 1
Little Egret 9
Grey Heron 1
Carrion Crow 12
Grey Seal 1 - I like this clip, this seal is eating a fish, meanwhile the fishermen are oblivious to it!
This shot is from an angle that will not familiar to most of you. The two buoys are the two out from the north wall. Obviously Blackpool Tower in the background, the "mushrooms" between the buoys are the return water outlets discharging the water from the water treatment plant near Middleton Nature Reserve. 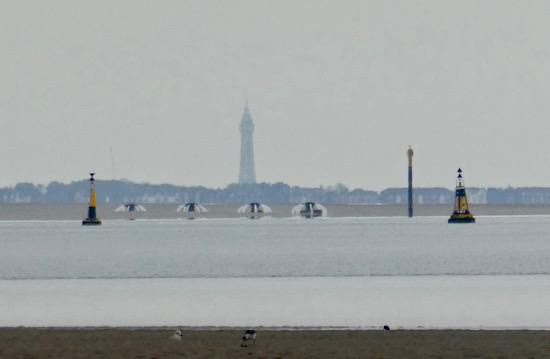