The earlier seawatch paid off

A fresh SW wind all day, high cloud with periods of sunshine.
Seawatch report from Pete:
Sea HeySham 0630-0830:
Razorbill 18
Guillemot 46
Razorbill/Guillemot 52
Puffin 1
Gannet at least 23
Common/Arctic Tern 2 very distant
Kittiwake 1 2cy
Sandwich tern 8
Arctic Skua 3 dark morph 1 light morph
Manx Shearwater  2
Grey Plover 8
Red-breasted Merganser 3
probable Slavonian Grebe 1
Plus an evening session:
Sea 1800-1900 north wall:
1 outbound dark morph Arctic Skua
1 Guillemot
1 Sandwich tern
1 Manx Shearwater
2 Gannet
7 Raz/Guill
Heysham skear - low water 14:00 (MD)
Very little, the only waders apart from Oystercatcher were:
Whimbrel 3
Turnstone 1
No Little Egret on the actual skear, but 3 feeding in the inshore pools.
There seems to be no small shrimps around, hopefully just a consequence of the prolonged period of offshore winds. The return of inshore winds may help restore the balance.
Eider 45
Great Crested Grebe 1
Middleton Nature Reserve (MD)
Just a quick check of the two main ponds to see how the mute situation resolved itself. It seems that the aggressive male was not coveting his neighbour's pond, but his neighbour's wife!
His mate with her cygnets was back on the "no swimming" pond. The main pond nest was deserted apart from broken eggshells.
The main pond female was now on the water accompanied by the aggressive male from the "no swimming" pond. The main pond male had at least survived the onslaught and was watching from high up the pond bank.
It's tempting to make a comment, but it's not appropriate. It may seem terrible behaviour to our eyes, but it is only one of nature's ways of ensuring the survival of the fittest.
The sun was shining while I was there and there were clouds of, largely immature, "blue" damselflies amongst the vegetation along the west bank of the main pond. I'm not great at immature damselflies (MD) but most seemed to be Common Bluetail. Not all immature though, this pair were mating.
There were some Blue Damsels as well, the only ones I managed a decent views of were Azure blues 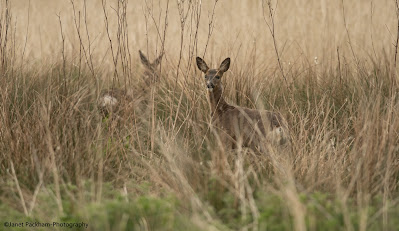